Is Charlotte turning into a hornets nest of Sprinter Vans? I hope so! 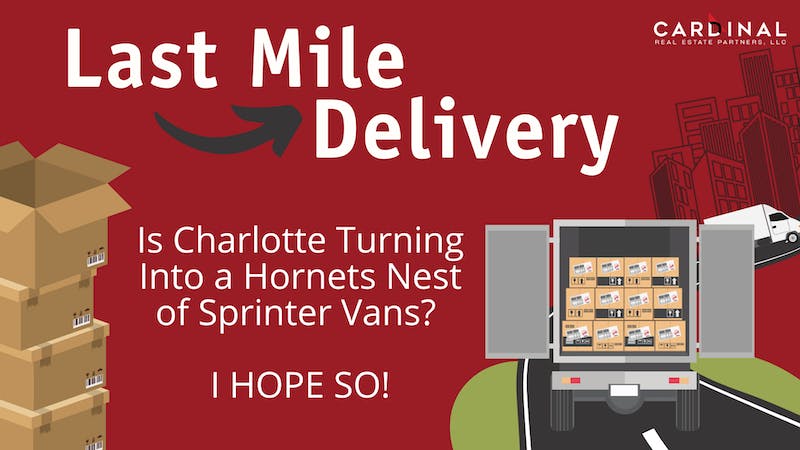 It seems that everywhere you looked this holiday season there were Sprinter Vans scurrying around. This little truck is truly the unsung hero of the 21st century of shopping. I also see them as a symbol of what’s to come in terms of commercial real estate development. (For a more radical take on how vans will change our lives, read this story by The Washington Post.) Essentially, anywhere there is available land that is near the Charlotte metro area, expect to see a developer considering it for a warehouse.

Some quick stats that support what I predict:

Personally, my wife accuses me of being Amazon’s best customer. With three boys in our house, we end up with our fair share of items being shipped directly to the house. Bathroom tissue, bubbly sparkling water, you name it. If we consume it, it likely has arrived by one of those vans.

It is ironic that the corner where five years ago I proposed a 1M SF Bass Pro Shop is where a 2M SF Amazon distribution center set up shop. We knew it was an ideal location. Bass Pro Shop turned it down, but Amazon jumped on it. Another sign of how e-commerce is – and has been – leading the way.

I am leasing a 209,000 SF distribution center that sits catty-corner to the new Amazon hub at Charlotte Douglas International Airport. We are seeing a lot of activity from distributors looking for a warehouse with neighbors like Amazon. These prospects are betting that being next to Amazon is good business in part because they predict there will be a huge supply of employees who will tire of Amazon’s working standards. There’s been a lot written about Amazon’s working conditions, including stories about grass root efforts by employees to improve working standards. It’s interesting to realize that other companies are positioning themselves to capitalize on these conditions by luring unhappy skilled workers.

The reality is these warehouse jobs are the jobs of the future given consumers’ seemingly endless appetite for last-mile deliveries. Last-mile distribution is up to 4X since 2009. In September, Amazon announced plans to hire more than 30,000 permanent staffers and tens of thousands of seasonal workers for the holiday rush.

For years it was hard to get Charlotte city planners excited about warehouses. Very little land in Charlotte was zoned for distribution. Planners hated the trucks, the jobs were considered low-paying, and the tax revenue generated was low compared to new apartment buildings. But savvy city planners are changing their minds.

I am marketing 145 acres in Norfolk, Va. This is a phenomenal infill site located in the heart of the most desirable area in the greater Norfolk market. Think of it as the SouthPark area of Norfolk. It’s an awesome, mixed-use site for retail, office, and apartments. We are collecting offers on it. But to get there, we had to educate local city officials on the importance of warehouses and of the powerful influence that same-day delivery is having on commercial real estate development. Originally, there was some old-school concern about the possible congestion this type of development would create. They thought ‘Why put warehouses on this dirt?’ But warehouses are an economic indicator for a city like Chesapeake. Similar to my family, people enjoy the convenience of same-day delivery, plus the jobs that industrial buildings bring are highly skilled.

The e-commerce industry will continue to evolve. Think driverless Sprinter Vans. Could Charlotte become a hornet’s nest of Amazon drones? I think so. Luckily, attitudes toward warehouses are changing to embrace this type of development. It’s an exciting time to be working in industrial real estate.

Want to talk distribution center possibilities, or are you interested in knowing more about warehouse development opportunities? Give me a call at 704-953-5500 or email me at John@cardinal.re.